Our resident athlete, Tess Johnson of the U.S. Ski Team, shared some insight about her training this past summer, including details on her productive water ramping season. Tess is currently training for the 2022 Winter Olympics, where we expect her and the U.S. Ski Team to put forth another incredible performance. Be sure to follow Tess Johnson and The Inn at Riverwalk for frequent updates about the road to the Olympics!

It’s hard to believe that another water ramping season in Park City, Utah has come to a close. This past one was particularly productive, and more importantly, fun! Historically, water ramping was the part of training I used to dislike the most. In fact, I would dread it some days because learning new tricks felt more defeating than progressive. However, last summer I committed to changing my outlook through sports psychology, and it worked.

It’s funny actually, when I was eight years old I wanted to be a slopestyle skier which is all about the tricks. I ended up in the sport of mogul skiing (which, for those who don’t know, is a combination of jumps and bumps), and my passion and strength naturally fell on the moguls side of things. These past two years, though, I’ve tapped back into my original passion for jumping, and not only has it paid off, it’s been instrumental in learning a trick that I’ve been trying to incorporate into my run for seven years. 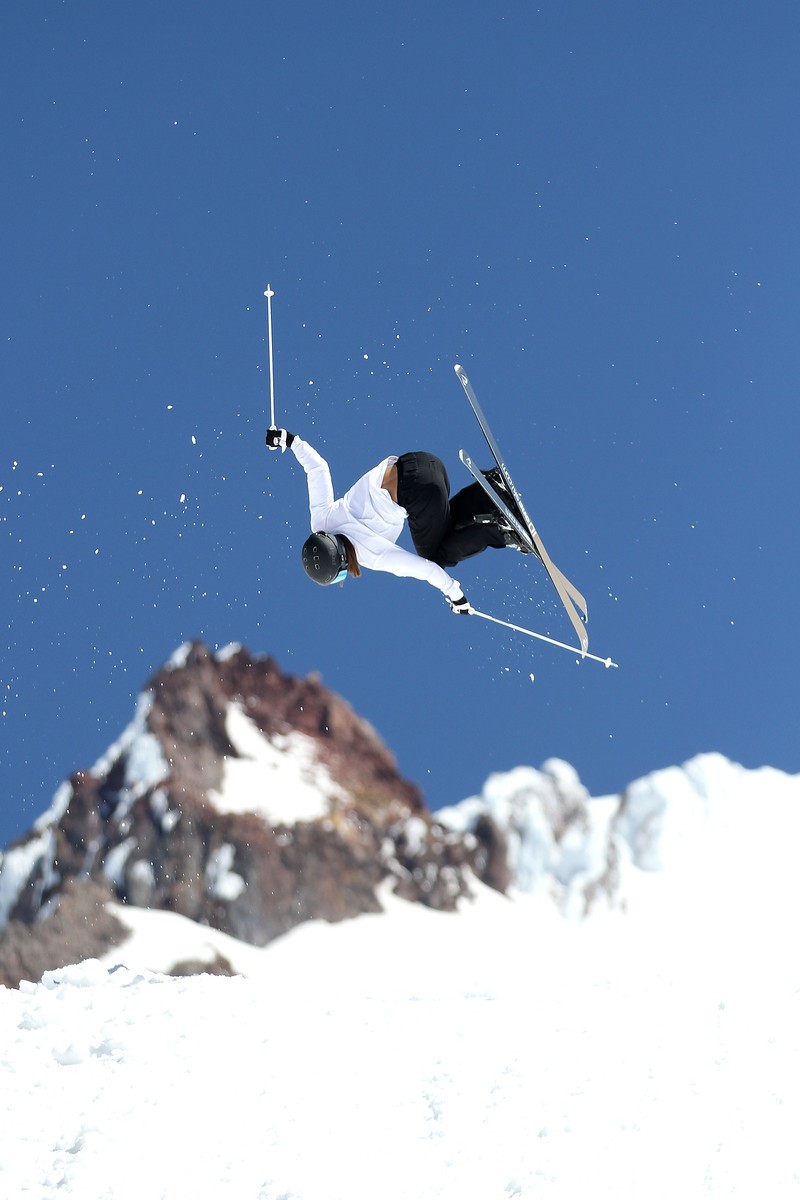 The trick is called a cork 720. It’s an off-axis 720 degree spin with crossed skis - an EPIC trick, to say the least. I did my very first corks on snow in Mt Hood, Oregon when I was 14 years old, the summer before I made the U.S. Ski Team. Seven years later after becoming an Olympian, graduating high school, winning a World Cup, navigating a pandemic, and dealing with the many triumphs and losses that come with this life, I’m officially bringing this trick into my competition run this year. While some female mogul skiers (all of whom are my inspiration) have been competing this trick for years on the World Cup tour, my path is different, and I wouldn’t change a thing.

For those who aren’t familiar, water ramping is a training tool we use during the summer to practice and perfect our jumps. It’s the ideal environment to try new tricks, tactics, and techniques because of the safety net that is the pool of water we land in! And yes, we have all our gear on, except we trade in the pants and jacket for a wetsuit and life jacket. 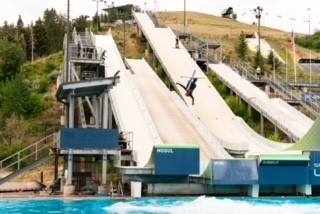 This past summer I trained 33 days on the water ramps paired with countless trampoline, gym, pilates, physical therapy, and sports psychology sessions. Because of all that hard work I’m the strongest physically I’ve ever been and have made massive progress in getting my cork competition-ready, perfecting my signature backflip venom grab, and improving my overall air awareness.

Although, it’s definitely not all sunshine and rainbows, or in this case PRs (personal records) and positive progress. Water ramping, and summer training in general, can get fairly monotonous. It is afterall the grueling cycle of performing a trick, swimming out of the pool, receiving coaching, and walking back up the stairs to do it 20 more times. Not to mention, we’re in the pool starting at 7:30 AM everyday which can get pretty chilly in September! 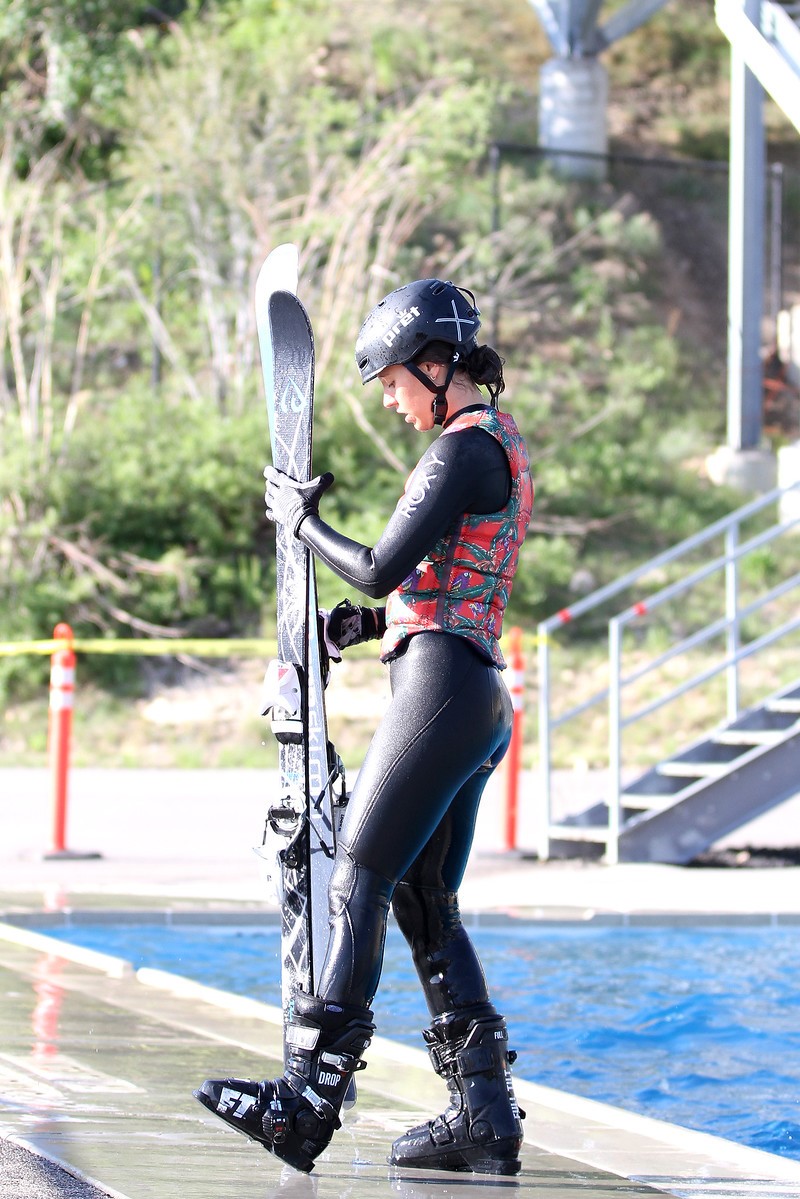 Just like any dream, there are tough days and setbacks along the way. But with the help of my coach, Riley Campbell, each day consisted of a new plan and a new objective. From an outsider’s perspective, one day appears identical to the next. But I made small gains every day, even if that gain felt like a step backwards at the time. Plus, I like to keep it diverse by throwing fun jumps at the end of sessions and challenging myself with mock competitions and creative jump games.

Our June and July water ramp camps were followed with two 2-week on-snow camps in Mt. Hood, Oregon. That’s what the summer training process looks like: ramp, ramp, ramp while getting strong in the gym, put it to the test on an isolated jump in Mt. Hood, rest and re-evaluate, then back to ramps to do it all over again. 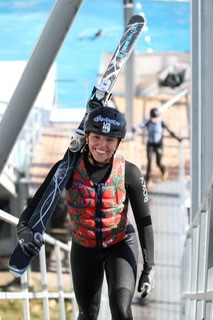 I absolutely love training in Mt. Hood in the summertime, and it was redeeming to see my tricks evolve over the course of the two camps. We haven’t been back on snow since we were last there in July, so we are all itching to get on skis again.

It’s been an exhausting, exciting, and effective summer of prep, and there are many people a part of my team that I have to thank for the progress I’ve made. My coaches, sponsors, sports psychologist, family, friends, and teammates have contributed so much to my journey, especially this year. That being said, the work continues and our next stop is Zermatt, Switzerland where my goal is to put this cork 720 in a top-to-bottom course!

After a long summer predominantly focused on jumping, I’m psyched to get in the moguls again. I just can’t wait to be back in this beautiful country ripping bumps and stomping jumps under the Matterhorn with my team!